One can never get enough of walking through the Old City. Usually, when I take visitors around, we have a specific circuit that I like to follow: going from the Jaffa Gate to the Armenian Quarter and then to the Jewish Quarter, and then finishing up for a big lunch in the Arab Quarter. At some point, I will more fully describe this short tour of the Old City, but in the mean time, I’d like to focus on the interesting people that one can encounter.

Being the “center of the world” means that people are naturally drawn to the Old City. And, as opposed to old cities around the world, this one is a fully functioning city: there are large residential areas, Churches, Mosques, Synagogues, inns, hospices, monasteries, schools and grocery stores. One can walk for hours up and down the hills and see incredible human variety.

We’ll start with the Western Wall. In Hebrew it is called the Kotel HaMa’arvi (הכותל המערבי), which literally means the “western wall”. In Arabic it is called the Hayat Al-buraq (البراق‎ حائط literally: the Buraq Wall). The revered wall was built in 19 BCE by King Herod and is the last standing retaining wall of the Second Temple. Not being a religious person, the wall doesn’t do much for me, but I do enjoy observing the devotion of the visitors.

From here we move to the roof of the Church of the Holy Sepulchre. This is the site revered as the Calvary, were Jesus was crucified and later buried. I’m not going to devote a large part of this post to describing the Church. It is very big and impressive, and so deserved a post for itself. It is the meeting place for Christians in the Old City, and if you hang around there enough, you will be immersed in the great variety of humanity that visits the Church every day.

Looking at the Church from the other direction, one can see the Via Dolorosa, and there is always a lot of good people watching there. 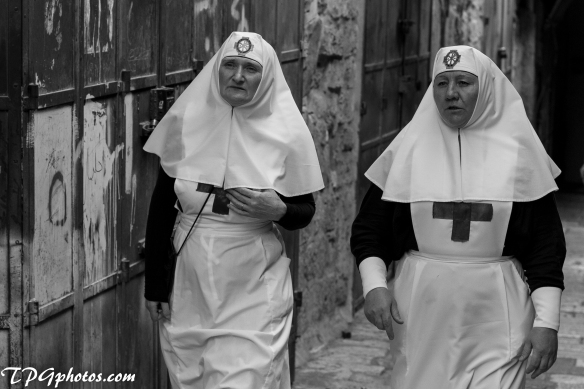 On top of the church is a monastery for the Ethiopian Orthodox community. The community has no property in the church, but rather has a gathering place alongside the Coptic Monastery. It’s a small courtyard, and leads into a chapel and a church. King Solomon, as we know, had quite a bit of dealings with the Queen of Sheba, and legend has it that when the Queen returned home, she was pregnant with Menelik (who would become the first Ethiopian emperor).

But, like I say, the Old City attracts all religions. Often, because of Israeli policy and control over the Muslim holy sites, prayer is restricted on the Haram Al Sharif (or in Hebrew: the Temple Mount), and so people are forced to show their devotion in make-shift meeting places. 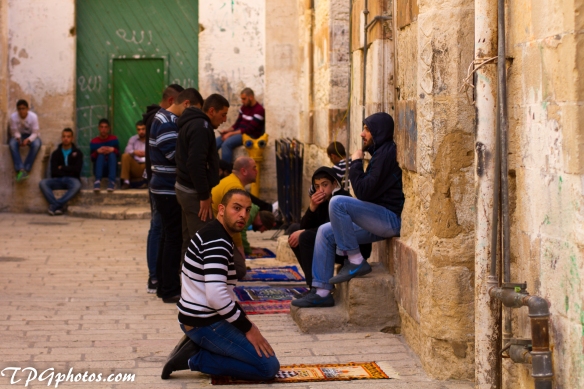